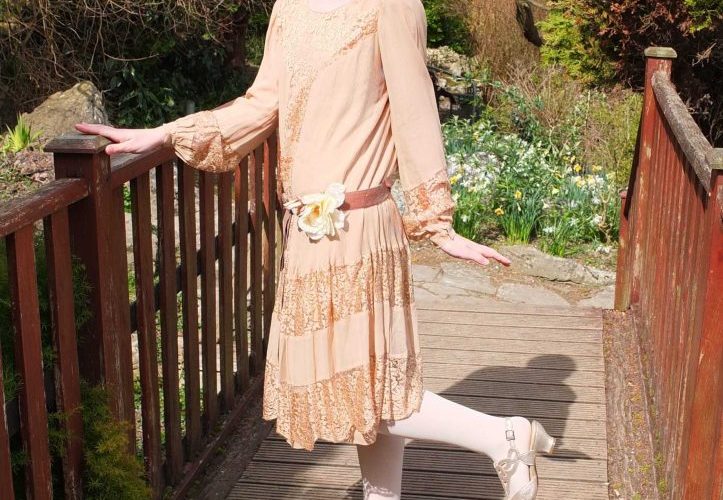 In a series of posts, exclusively for ‘It’s A Shoe Thing’ vintage blogger Jenny takes us through the decades, showcasing her favourite Hotter styles to suit her vintage outfits. In her third post Jenny creates a 1920s inspired look…

The 1920s shone a new spotlight on shoes, due to rising hemlines. Women’s hemlines started to rise in the previous decade, due to the onset of WW1, and the requirement for women to fulfil more practical roles. In the 1920s, skirts hit the dizzying height of scarcely below the knee, which would have been unheard of only a few years previously. Legs were clad in stockings, usually of creams or blacks, although pastels and patterns were popular (particularly amongst the daring ‘bright young things’ of the day).

With hemlines now exposing the entire lower leg, of course the feet were now prominently on show. More ornamented styles of shoes became popular, elaborate strap-work with cut-away details paved the way for the introduction of the T-Strap in the early years of the decade.

The popularity of the Louis heel continued into the 1920s – the Louis heel is characterised by its provocative curved shape, and was particularly favoured by Louis XV at the Versailles court in the mid 1700s.

The Juliette is a perfect example of 1920s inspired styling; the low Louis heel, soft metallic tone, and the elaborate strap-work perfectly convey the era of the flapper. I teamed Juliette with cream hosiery, an original 1920s dress with original belt, and vintage spectacles. The low heel makes Juliette very comfortable, and the sling-back draws attention to the back of the leg wonderfully. Juliette is also great for dancing in – I actually did some Charleston whilst taking these pictures much to the amusement of on-lookers!

I think Juliette is perfect for recreating the styles of the 1920s and 1930s depending on how you style her. For more of a daytime look, choose the Navy or Black colour-way, and for evening the Soft Gold gleams decorously.

For daytime or for dancing, Juliette will provide comfortable support whilst looking fabulous!

Find your vintage style at www.hotter.com

Her love of clothing often sees her wearing her own creations and designs. When not in her sewing and design studio, she can be found  along the seafront admiring the views of the South coast.

Happy 90th Birthday To Her Majesty The Queen