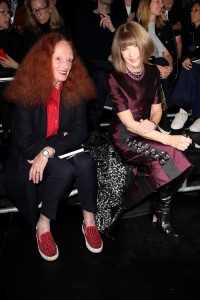 “The fashion crowd has been kicking around in trainers for sometime now.” Alyson Walsh writes exclusively for It’s A Shoe Thing.

After her recent New York catwalk show, Victoria Beckham took a bow in a pair of trainers. When the designer formerly known as Posh switches to Sporty, that’s instant headline-grabbing news. Known for her love of a killer heel and designer handbag, VB’s move over into sneaker chic feels like a seismic shift. But, what took her so long?

The fashion crowd has been kicking around in trainers for sometime now. American Vogue’s creative director at large, Grace Coddington often appears on the front row in skate shoes; proving that primary coloured pumps are a neat way to perk up her an all black fashion uniform. The super-stylist and real star of the September Issue knows the value of a comfy shoe, and looks ace in sneakers.

As a lifelong sports shoe fan, I’m fortunate enough to work in an industry where a more relaxed way of dressing is the norm. I can get away with posh sweatshirts, denim jeans and trainers. Throw on a tuxedo jacket and I’m good to go. At the age of 52, I’m just a more expensively dressed version of my teenage self. Though I do draw the line at pimped-up designer trainers with sparkles and spangles and a ginormous price tag.  To me the ‘luxe sneaker’ is a bit too ostentatious. I prefer to keep it simple. And besides, £700 for a pair of designer trainers, that’s the equivalent of a summer holiday and I know which I’d prefer…

Alyson Walsh, former fashion editor and successful blogger whose creed is that ‘style is forever’ writes exclusively for It’s A Shoe Thing

Alyson Walsh is a former fashion editor for Good Housekeeping magazine; a regular feature writer for the Guardian, Financial Times ‘How To Spend It’, Saga Magazine and allaboutyou.com. Alyson started her successful style blog, That’s Not My Age, eight years ago in order to celebrate the creed that ‘style is forever’. In her book ‘Style Forever’ she explores how the topics of fashion, age and culture are connected. Alyson has also appeared on BBC News and BBC Radio 4’s Woman’s Hour with Jenni Murray. Read Alyson’s blog at www.thatsnotmyage.com .

Trainers are the new heels