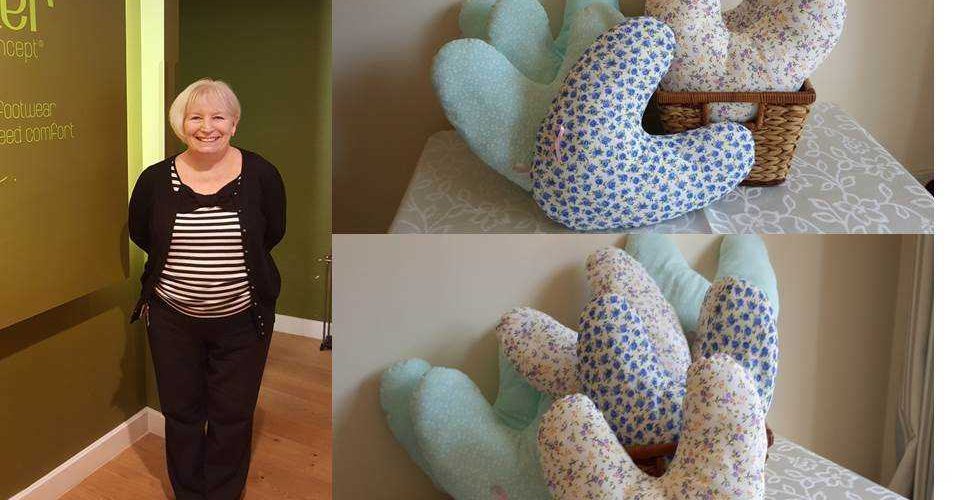 Hereford Store Manager Jan Paton probably never considered herself inspirational, but when she sent us a photo of her latest craft creations we knew there was a very special story to be discovered.

Jan has been making heart shaped cushions to offer much needed comfort for women, like herself, who have undergone a mastectomy.  They relieve pressure from arm resting on the side of the breast and she has made over 20 so far. We thought we could encourage other craftmakers to create these clever little cushions with Jan’s simple pattern.

“I went for my mammogram in June 2016 and was recalled for further investigation and several biopsies.  A week later I went to the cancer clinic in Hereford where I was told I was in the early stages of in situ ductal carcinoma which would require a mastectomy.

“I was pretty shocked at the time but the surgeons and staff at the hospital were amazing. After several weeks of consultation a date was set for my mastectomy and reconstruction with a silicone implant.  I did not expect to have any further treatment but two weeks after my operation I was informed that I had a secondary invasive cancer in the chest wall. It was a real shock and now I’ll be taking pills for up to ten years as a preventive measure.

“I returned to work eight weeks after my operation with support from the company and my colleagues. I also attended a local group called Haven who offered support with various therapies and gave me a chance to talk to others going through the same experience.

“The heart shaped cushions I have been making are for the hospital to give to ladies going through breast surgery, I still use mine as it relieves pressure from my arm resting on the side of the breast. I have some cushions in the shop so if you know anyone who could use one please pop in to see me in Hereford!”

Now Jan is enjoying being back at work and making plans for holidays to Italy and Spain and she is also planning to take part in Race for Life with her friends in June.

“I feel I have so much more to look forward to now; cancer makes you stop and look at what’s important to you.”

And Jan’s most important message …

I would urge everyone to take advantage of breast screening when it is offered; without it my cancers would have gone undiagnosed and the upside for me is if I had not had my mastectomy the secondary cancer would not have been picked up so early.

Why not follow Jan’s pattern and make the heart shaped cushion for your hospital or send it to Hotter HQ and we’ll forward it to Jan.

For your cushion you will need 1.4 metres of fabric which will make 3 cushions, using the template which is a half heart shape. The photo shows size and measurements how to make. Cut on fold twice, put right sides together joining them, allowing a 4 inch opening on one side for filling, the filler is toy or cushion filler which can be purchased from your local haberdashers.

Not All Heroes Wear Capes