We met Professor Joann Fletcher a couple of years ago, after discovering her love of our super comfortable, black footwear (her trademark shade), and she delighted us by sharing her knowledge of the Ancient World by writing articles for us on Roman and Egyptian footwear (see the links at the bottom of the page to read her articles).   Her new BBC series ‘Immortal Egypt with Joann Fletcher’ began this week, and it promises even more fascinating glimpses into this Ancient World … whilst Hotter spotters may be able to glimpse her trusty Hotter boots which, she tells us “literally carried me right through the series”.

Joann followed the footsteps of the Ancient Egyptians into what remains of their houses and workplaces. Photo courtesy of A Aboulfath.

Here Joann writes for us …

It’s great to be kicking off the New Year with our new BBC series ‘Immortal Egypt’, to bring a little bit of sunshine to some dark January evenings. At almost three years in the making, we’ve been filming all over the place, throughout Egypt and far beyond, from locations as diverse as Khartoum and Wigan(!) in order to track down a whole series of new discoveries to try and tell the real story of ancient Egypt. 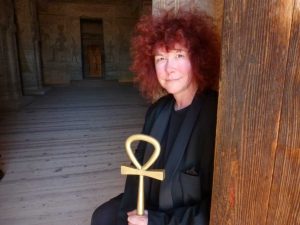 Professor Joann Fletcher has a new series on the BBC which has taken three years to complete. Photo courtesy of C Turroni/Lion Television.

Beginning with spectacular rock carvings representing Egypt’s earliest art at a staggering 19,000 years old, we then focus on the world’s first calendar, a mini Stonehenge, which at around 7,000 years old forms the origins of the 365-day calendar we still use today (view a clip here: BBC Programmes). And it’s from such early origins that ancient Egypt rapidly developed into the iconic civilisation which is so instantly recognisable today.

This is especially true of the mighty pyramids, which of course feature prominently in the series. One particular highlight was spending a whole hour alone in the normally jam-packed Great Pyramid of Giza, which was so silent even our whispers echoed right around its stark stone chambers (view a clip here: BBC Programmes).

And of course we can’t forget the pharaohs, the men – and women – who ruled over this ancient culture for 3,000 years, from my personal favourites Cleopatra the Great to Amenhotep III, whose newly discovered statues I was even allowed to touch. And while you may not have heard of Amenhotep himself, you’ll certainly recognise his grandson, the world-famous Tutankhamen, whose tomb and treasures continue to reveal secrets making world headlines today.

But in the series we were also keen to take a look at the lives of the ‘real’ ancient Egyptians, the farmers and workers, soldiers and scribes, clergy and craftspeople who actually created this great culture we so admire today. So by following their footsteps into what remains of their houses (above right) and workplaces, we catch intimate glimpses into their daily routines, from where the slept to what they wore, even how they kept their teeth nice and clean! 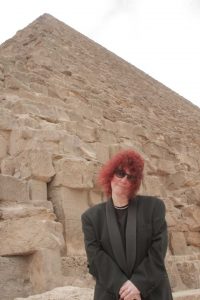 Joann’s new series has been almost three years in the making, and she has been filming all over the place, throughout Egypt and far beyond, from locations as diverse as Khartoum and Wigan. Photo courtesy of courtesy C Turroni/Lion Television.

And that’s the thing that makes the ancient Egyptians so fascinating – for in many ways they were just like us, only living their lives in a desert environment so dry it preserved so much evidence of their everyday lives which then continued beyond death. For their firm belief in an afterlife meant they were also buried with their personal possessions, the wealthy also able to afford spectacular painted coffins and golden death masks. So the series not only features the iconic gold mask of Tutankhamen, but a contemporary example discovered only last year – not in Egypt, but in Wigan! 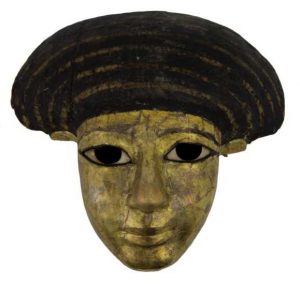 Now on display in the Museum of Wigan Life, this spectacular face (left) reveals that ancient Egypt is often far closer than we might think. And with over 200 different collections of Egyptian objects in museums right around the UK, this of course includes the British Museum where we were allowed to film at night, capturing the appropriate atmosphere we needed to tell a darker side to Egypt’s long story.

So from nights at the museum to long days in the brightest sunshine, it really has been a non-stop whirlwind, involving thousands of miles of travelling by bus, boat, car and camel, and filming in all kinds of weather. Yet despite sudden sandstorms in the desert or rainy days in Lancashire, my trademark umbrella came in very handy against all the elements, as did my trusty Hotter boots which literally carried me right through the series!

Prof. Joann Fletcher’s new series ‘Immortal Egypt with Joann Fletcher’ began at 9pm on BBC 2 on 4th January, her new book ‘The Story of Egypt’ is published by Hodder & Stoughton.

Discover our new must-have collection of super-sporty shoes that are ideal for your busy lifestyle.