HOT’ OFF THE PRESS: Latest news on this story (9th February)

Abbie told us “I am so happy to have been nominated for this award yet alone winning it! It has been such an experience that I shall never forget and I am so grateful for people believing in me, and also the support I have received. I had the most amazing night at the mansion house and receiving my award is something I am so proud of, I really will never forget it.”

HOT’ OFF THE PRESS: Latest news on this story (26th Novovember) … We’re delighted to announce that Abbie Morris has won the Pattenmakers Young Manager of the Year award 2016 – congratulations to her from the whole Hotter team

On behalf of the Pattenmakers Society, Liveryman Jane Wilson said: “We were all impressed by Abbie’s positive attitude, calm confidence and commitment to continually improve her performance in the workplace at Hotter.  She conducted herself impeccably and was an excellent ambassador for your company.”    The society was overwhelmed with the quality of all three of our candidates and Allison and Jenna were also congratulated for their enthusiasm and commitment.

Abbie will receive the award in January from the Lord Mayor of London at the Pattenmakers Annual Banquet at the Mansion House. She will also be granted Freedom of the Livery which will lead to Freedom of the City of London! She will be accompanied to the white tie event, which features the Pikemen and Musketeers of the Honourable Artillery Company and Fanfare Trumpeters, by Operations Director Robert Perkins and Factory Manager Joan Stewart – we look forward to sharing lots of photos.

HOT’ OFF THE PRESS:   Latest news on this story  (3rd November) …. congratulations to Jenna, Allison and Abbie who have all been successful in getting through to the interview stage of the Pattenmakers competition and will be joining other applicants at the Young Pattenmakers’ Dinner and champagne reception next Friday in London.

We’re delighted to announce that Allison Greenland and Abbie Morris from our Factory and Jenna Hamlett from our merchandising team have been nominated for the Pattenmakers Young Managers Award 2016. 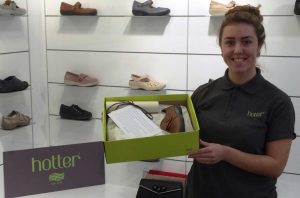 Abbie has a genuine passion for the industry.

Allison’s work effort has been outstanding.

Jenna’s organisation skills are second to none.

This prestigious award is open to employees of UK footwear companies under 32 nominated by their company for showing ambition and promise. The winner will not only be awarded a 12 month tailored training programme, but also the opportunity to become Freemen of the Livery which entitles them to be granted the Freedom of the City of London!

Here's what their sponsors said

Shortlisting is taking place as we speak and interviews for successful candidates will take place in London in November. The winner will be presented their award by the Lord Mayor of London at the Pattenmakers’ Annual Banquet in the Mansion House in January.

We’re all wishing Allison, Abbie and Jenna all the very best of luck with their nominations.

The Worshipful Company of Pattenmakers  was formed in 1670. Pattens were under-shoes designed to be worn outdoors to lift the wearers, and their shoes and ladies’ dresses, above the mud and grime of early streets.  Today the Pattenmakers Charitable Foundation has developed a new role in funding the design and bespoke fabrication of orthopaedic shoes, particularly for the UK’s injured servicemen.

According to the British Footwear Association www.britishfootwearassociation.co.uk  there are two main London Livery Companies who are involved with the footwear industry. These ancient institutions (Pattenmakers and Cordwainers) were responsible for the training of new entrants to the footwear industry in London in medieval times and for preserving the overall reputation of the trade.  To discover more about The Worshipful Company of Pattenmakers, visit their website www.pattenmakers.co.uk

The latest blog in our Mind, Body & Sole series covers simple and easy exercises to introduce into everyday life.